Hello everyone. You know I love to find new goodies, and this lovely author sent me an email asking if I’d like to review her new book. Now it’s already out in ebook, but she is releasing the paperback now too! And let me just say, I love to say yes because I find amazing books like this one. Those little hidden gems. Now let me show you some goodies!! 🙂 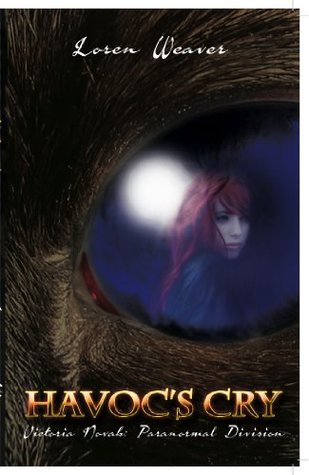 by Loren Weaver (Goodreads Author)
The only living Sorceress, Victoria Novak, finally earned a peaceful, normal life. But with one howl on a full moon, her whole life crashes back into paranormal chaos. The FBI show up to recruit her to the Federal Paranormal Division, the very first all paranormal police force and she can’t decline. Tori must train a new team of special agents in paranormal etiquette in the middle of solving a crime that’s leaving ravaged bodies twisted into grotesque shapes. Caught in the middle of a werewolf fight for dominance, Tori can’t let personal emotion interfere with solving a crime. Until the crime becomes personal. With her life spinning into chaos, the real question is how far is she willing to go to answer Havoc’s Cry.
AMAZON BUY LINK!
My review:
Dude I am totally PUMPED UP about this new series! Seriously, think Anita Blake, in the beginning when she was totally bad ass, meets Rachel Morgan. HA!!! Totally powerful and bad ass in both ladies right, except that Tori has a serious mouth on her, and people can’t say her name because it’s cursed, and she can literally kill you quicker hahahaha, and she dies, several times, but it’s ok, because she doesn’t stay dead, and no she doesn’t turn vamper or zombie. HEHE! See, you totally wanna read this one.
Ok, so Tori has been hiding who and what she is for ages. She went into hiding and even had her powers hidden and bottled up because she wants it that way. But, something happens and her powers come back in a flood and she needs them to help save lots of folks. She is recruited by a new FBI division to help police the paranormals, and she’s going to need all the help she can get. These people have no idea what’s really going on. And when weres start getting savagely murdered and shredded, she’s the only one who can help, and she brings her new team along the way.
Tori is hilarious, she has a mouth on her that will make you giggle then make your jaw drop. She’s a fighter, literally, because she had to be, she was seriously raised by vamps, which sucks to be her right. 🙂 But, now, she doesn’t want to be the scary big bad executioner everyone knows her as. She also wants to help people and paranormals live together like normal people do, peacefully, and if she needs to fry your ass to make an example she will. I seriously love this character. Like, surrounded by dudes, but she’s stronger and faster than half of them, and can hold her own, but not just that, she is the knowledge bank, so she has the brains too. And some of those guys are just awesome. AND NO, there will be no love triangle, or even a romance thing, at least not right now. Not even a hint, because she has ass kicking to do 🙂
The writing is amazing. I started on page one, and didn’t put it down until I was finished, and let me say that this one is a longer book, but I still couldn’t put it down! I loved it. Yes there are a few things that maybe could be fixed, but not nearly anything big enough for me to mention, and I would definitely recommend this to anyone who likes a strong heroine, some crazy supernaturals, a bunch of them, and a great urban fantasy, because romance didn’t get in the way around here 🙂 I am thrilled to say that this is a new favorite, maybe one of the best I’ve read so far this year, maybe even before that. So, go get your copy!!! 5 WOLFY, SCARY, ASS KICKING, TOTALLY ROCKING PAWS!!

website http://www.lorenweaver.com
twitter username ReadLorenWeaver
Loren Weaver is an engineer for an oil company as her day job. She loves crazy sports and has her black belt in Tae Kwon Do, master SCUBA diver certificate, and motorcycle license. Although engineering pays the rent, she writes because she loves to hear and to tell a good story.
Giveaway!!
So, the author is going to come back in a week or so, so I can interview her… and she says I can do an ebook giveaway until then. 🙂 YAY!!! So leave me a comment, and I’ll pick a winner!
GOOD LUCK!! Trust me you want to win this one! 😉 Ms L, I love you!!! I love your book!!! Please and thank you in advance for book two hahahahaha! I can’t wait to do this again with you! 🙂 Happy reading everyone and later gators!