Sometimes being a blogger is awesome! I love Ms Reine’s work. All of them! When she let me know that since I loved her other stuff that she would allow me to read her newest series, I seriously squealed! And for good reason! It’s her best yet! So, today I am spotlighting her goodies with some reviews 🙂 Let me show you! 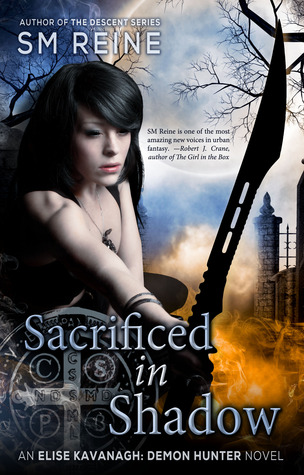 by S.M. Reine (Goodreads Author)
Lincoln Marshall is a small-town deputy with a very big problem. Six members of his church have been found dead, killed by a rogue werewolf. He’ll have to make a deal with the Devil to save victims that have gone missing — maybe literally.
Elise Kavanagh, preternatural investigator and exorcist, is the expert when it comes to violent deaths at the jaws of evil. She’s also the demon known as the Godslayer. Elise jumps at Lincoln’s case, and it’s not just because of his down-home charm. Someone’s laid a trap for her in Northgate, and she wants to find out who.She’ll have to team up with Rylie Gresham, Alpha of the last surviving werewolf pack, to figure out who’s trying to blame the murders on werewolves. Only together can they stop the killings — and uncover the secrets buried in Northgate.

My Review:
I love this series! I love that there’s everything I enjoy about a book in it. I am so excited that each of her characters from other series have continued on into this one.  I love Riley. I love the werewolves. I love Elise. I love her demon hunting team! I love where this went, because even if you haven’t read any other book from any other series, you would still be ok to read this. BUT you should be reading everything she touches 🙂
So, Elise is our main character. She is a complicated being LOL I really don’t want to give away spoilers, so I am going to try to be careful. She has a bad attitude, well, I actually like her attitude, but a lot of people will find her a little blunt. She kills demons. She has demon powers. She’s smart, she’s tough, she’s definitely someone you should be scared of, and then, you can’t out run her, so you might as well be on her side. She would be a fun friend! And with all of that, she has a heart, and a soft side, and compassion, and empathy. Hard to believe, but that’s why I love her. She is one of the most complex characters I’ve ever read! She’s my hero!
Lincoln is the sweet, good boy, by the book, deputy in a small town. He’s asked for Elise’s help, and holy crap, this opened the can of worms, and things just go nuts. I liked him, because those he comes off as the goody two shoes, he’s inner monologue is AWESOME! It’s the perfect guy thing, because they really do think about sex a lot, and even the good ones can’t help themselves sometimes. And now, this starts the fall.
There are some seriously creepy people in here. The bad guys are gunna have your jaw dropping, and then you’ll still be in shock with the ending. You get to see so many wonderful previous characters and you get to meet some new great ones. I wasn’t a big fan of James in the beginning, and now, I know why, but I can’t tell you. The wolves just have me, I love them. And you will be second guessing yourself at every moment. The mysteries and action had me completely glued to the page. I could not put this book down. I actually jumped right in to book two! It’s a wonderful, action packed, mysterious ride of crazy! I love it, I want more, I need for it to be a continuous gimme gimme hahahaha 🙂 I will stop now, because I have to figure out how To tell you about book 2 without spoilers 🙂 5 EXTREMELY AWESOME FANTASTIC ASS KICKING PAWS! 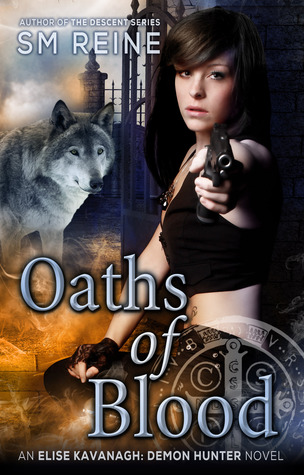 by S.M. Reine (Goodreads Author)
Werewolves are immune to every illness and can heal any wound. It should be impossible for one to become possessed by a demon. But that’s exactly what Seth Wilder is facing: a werewolf gone insane from possession. He has no choice but to deliver her to the only exorcist in America, Elise Kavanagh, who also happens to be a powerful demon known as the Godslayer.Elise is in hiding when Seth and Rylie Gresham, Alpha werewolf, arrive seeking her help. She agrees, but everything has its price. What they learn about the possessed werewolf changes everything–Hell and Earth, the pack, and the future of the entire world…

My Review:
oh my god! oh my god! oh my…….. did you seriously…. yes, you did, oh my, holy shhhhhhh…… I can’t tell you. I can say that I am devastated. I am shocked. I am completely unprepared. I am slightly at a loss. Ok, let me try…. There are multiple POVs in here, which added to the POVs from Sacrificed in Shadow. I happen to like getting a look into everyone’s heads. After all the things that happened at the end of the first book, I was a little unprepared for how shocking this one would be.  A big part of this one is Seth. You get to see how Seth feels and looks at the pack. You also get to see how Elise is dealing with things from the first book as well as this new threat for being framed for murder of a big politician. And James is still causing havoc and manipulation.
There’s a lot of mystery and action in this one. I thought the first one was top notch, and this one is even better. I am obsessed with these characters and their stories. Each character is so well thought out, and complex, and real. You will get attached to every one of them. You will feel the anguish for the bad guys. You will be torn with decisions right along with them. You will cry, like I did, at the end, when you realize that that really is real and just happened and you can’t take it back. I think this may have been one of the most emotional books of any of Ms Reine’s I’ve ever read. She got me on this one.
I recommend that you read this series. And if you really want the best experience, read the two starter series. Rylie and her wolves have a start- you can even get that book one for free, I’ll leave the links below. And Elise’s start is also free. And then read everything else in between too! I need everything! I can’t grasp the awesomeness that came with the end of this one. 5 COMPLETELY SHOCKING HEART STOPPING PAWS!!! 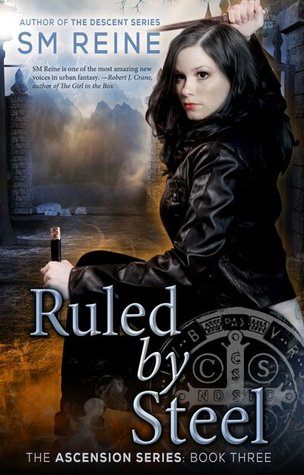 Only a demon can save the souls trapped in Hell.
Elise Kavanagh failed to prevent the Breaking, and now Hell is spilling onto Earth. She’s delved deep into the City of Dis in an attempt to stop the infernal armies-but even the legendary Godslayer is unprepared to face Dis’s fiercest demons, not to mention the responsibility of liberating the humans they’ve enslaved.
On Earth, rogue angel Nash Adamson is wing-deep in damage control after the Breaking, and his fellow angels don’t want to get involved. War is approaching the werewolf sanctuary.
If Heaven won’t help them, he’ll have to turn to Hell for salvation. Everything hinges on who can control the Palace of Dis. Elise and her allies have no choice but to rule by steel…
This one is just released, not in ebook yet, but paper back and I am reading it now. I will have my review VERY soon! I picked it up immediately! 🙂
About the Author: 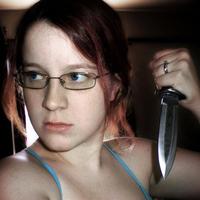 Hi everyone! My name is Sara, and I write urban fantasy and paranormal novels as SM Reine. I collect swords, cat hair, and typewriters (which I do use for writing!). It’s a good day when those three things have nothing to do with each other.If you would like to know the instant my next book is available, you should enlist in my Army of Evil! We have a wicked cool secret handshake, but you’ll have to sign up to learn it. 😉 Check it out —http://smarturl.it/armyofevil
This link is the author’s amazon link…. http://www.amazon.com/S-M-Reine/e/B004Y577GM/ref=ntt_athr_dp_pel_pop_1
she has several of her books free for kindle right now, so I suggest you get some of those!
I wanna thank Ms R, YOU ROCK!!!!! I hope you guys enjoyed today! Enjoy the freebies! 🙂 Happy reading and later gators!